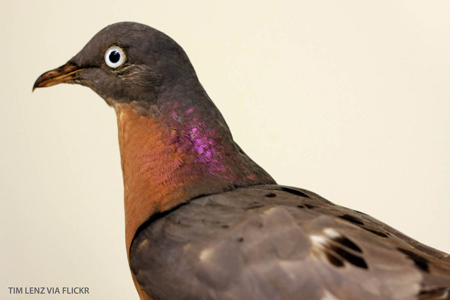 “There will always be pigeons in books and museums, but these are effigies and images, dead to all hardships and all delights. They know no urge of the seasons, they feel no kiss of sun, no lash of wind and weather.” Aldo Leopold

The very last passenger pigeon, Martha, died at the Cincinnati Zoo in 1914. The species went extinct due to man’s over-exploitation, and the skies remain forever void of the billions of birds that once flew freely. This extinction helped spark the creation of conservation laws that curtail and regulate the type of hunting that caused their demise.

Species extinction is analogous to a machine losing pieces. The machine can keep running for a while, even if it is missing a bolt, washer, or other seemingly nonessential part. But if parts keep falling off, how long can it go on functioning?

That is what is happening on earth. Small parts of our working ecosystems are being lost. How long can all the systems that support life continue to operate, while losing pieces? This analogy can also be used to describe the effects when an endangered species is able to recover. If we save all the pieces, we can make the machine work again.

Several factors have contributed to successes with endangered species. Habitat preservation and reconstruction are essential. Changes in human behaviors and attitudes toward these species often are necessary for successful reintroductions. Laws now protect deer, turkey, geese, and beaver. They cannot be harvested during their breeding seasons and limits are set on the numbers taken during hunting and trapping seasons. Large predators are no longer thought of as vermin.

Read “On a Monument to a Pigeon” from Aldo Leopold’s A Sand County Almanac. He writes of the extinct passenger pigeon. This essay conveys a sense of the importance of trying to save endangered species. It may inspire students to write their own essays on how they would feel if a species now endangered became extinct. Endangered means there’s still time, extinct is forever.

Have students research species of wildlife extirpated from Iowa. Which ones have returned or been reintroduced?

Check out these great activities while studying threatened and endangered species: