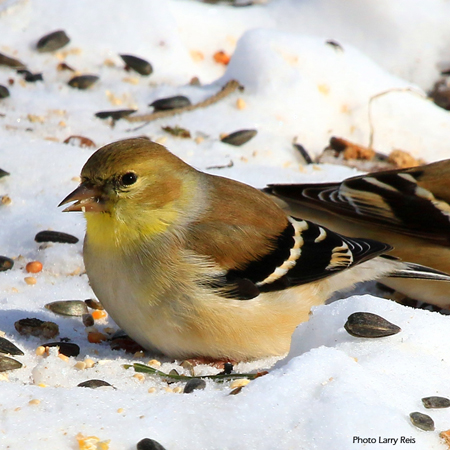 For many Iowa animals, the stark landscape – bare trees and a bright white groundcover – makes them stand out more in the winter, which is good news for those who enjoy watching wildlife. However, for a few Iowa critters, winter is a time for them to blend in with the scenery.

Jackrabbits
They may have “rabbit” in their name, but Iowa’s jackrabbits are actually hares, related more to the snowshoe hare than the cottontail rabbit. Come winter, jackrabbits shed their summer fur – brownish-gray speckled with brownish black and a white tail – to make way for their white winter coat. The only coloring left is black on the tips of the jackrabbit’s ears and a light gray tinge to the ears and back. The changing coat allows the jackrabbit to hide better in the conditions that different seasons bring.

What it can’t hide from, however, is habitat loss and wet weather during nesting seasons. Once widely found in grasslands in northwestern Iowa and once a common game species, their numbers have declined in recent years. 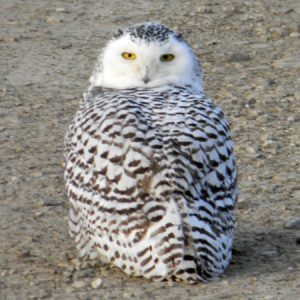 Snowy owls
The snowy owl can be a winter visitor in Iowa. It can be difficult to discern the precise reason why any snowy owl may be turning up further south than normal, the reason is usually not to the benefit of the owl. Common reasons for these southern “irruptions” can include shortages of food (lemmings) further north in core wintering areas, or an excess of young birds that are driven from the better northern wintering areas to sub-par locations further south. So if you spot one, it’s a rare sight indeed. The snowy owls that have been sighted should observed from a distance so as to not cause the owls to expend energy escaping the human stressors. Least weasels
The smallest weasel in Iowa and the smallest carnivore in the world, the least weasel also has two color phases. It loses its reddish-brown coloring on its back, sides, tail and top of its head to get ready for winter, when it may become all white. Spring and fall coloring are often a mix as the color transition takes place. It’s not likely you’ll see a least weasel, as they primarily hunt at night and below the snow, but you’ll occasionally find them caught above a hard-crusted snow. Least weasels are small guys, rarely growing longer than 10 inches.

American goldfinch
Iowa’s state bird doesn’t lose all of its coloring in winter, but if you see one in winter, you’ll notice its hue is more muted than its usual bright yellow. Most birds sport vibrant colors in the spring to attract a mate during breeding season. They then molt their feathers to bring in a more drab coloration for the winter, as their normal bright coloration would make them more visible to predators.

Trumpeter swans
Trumpeters’ year-round white coloring does allow them to blend in with the snow – mostly. Their large black bills and black legs provide enough contrast against the white snow to allow you to spot them pretty easily.

Project WILD Activities to use while studying camouflage: