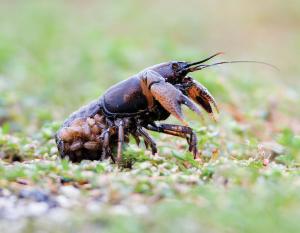 More than 97% of the animal species on Earth are invertebrates. Invertebrates are small animals that do not have backbones. There are many types of invertebrates, from fluid-filled jellyfish, and squishy earthworms to hard shelled insects like beetles, and eight-legged arachnids. This fascinating and diverse group of animals spans the globe – invertebrates live on every continent and in every body of water!

Crayfish are usually associated with aquatic habitats such as ponds and creeks. The prairie crayfish is one crayfish species that breaks that mold! Prairie crayfish, as their name implies, live in prairies and other grassland. However, since so little prairie remains in Iowa, they are frequently found in ditches or poorly drained pasture land. They dig deep burrows, over 6 feet deep, and leave a distinguishing “chimney” of mud around the entrance. Their burrows are usually below the water table and water-filled.

Prairie crayfish are bright red to reddish-brown with a high-domed shell. Their pincers are large with many bumps. Adults may be up almost 3 inches long. Their gills are able to obtain oxygen from the air for extended periods of time as long as conditions are moist. Prairie crayfish live for 3 or 4 years.

Prairie crayfish are secretive and nocturnal, coming out of their burrows only at night or during heavy rains. They can often be seen crossing roadways or walking in flooded roadside ditches during the spring and summer months. Prairie crayfish feed on plants, insects, and pretty much anything they can find, dead or alive.

Mating occurs during the spring and after the female lays her eggs she carries them under her abdomen. She will carry them through hatching and until they grow large enough to care for themselves at which time she will leave them in a suitable habitat.

Iowa was once covered by vast acres of rolling prairies. It is estimated that less than 0.1% of Iowa’s original prairie remains. Although some species, such as the prairie crayfish, have adapted and continue to thrive without vast prairie land, other species have not been so lucky. Research other native prairie wildlife species. What are some features of wildlife species that have adapted well to prairie destruction? What are some features of species that have not?

Activities that correlate with Iowa invertebrates:

Cross-reference to these Aquatic WILD units: