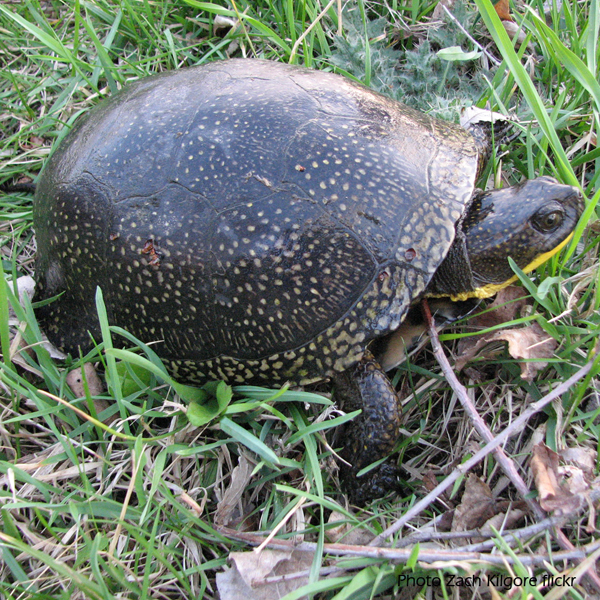 Herps are cold-blooded, which does not mean that their blood is actually cold. Cold-blooded animals are animals that do not generate their own body heat but rather rely on the ambient temperature surrounding them (air, water, soil, etc) to regulate their body temperature. This is why you see snakes and turtles basking in the sun or hiding in the shade – they are regulating their temperature.

Unlike amphibians, reptiles are not tied to water to lay their eggs and for their young to develop. Reptile eggs have tough leathery skins that do not dry out and their young are developmentally identical to adults and do not go through metamorphosis.

Let’s take a closer look at one of Iowa’s rarest reptiles – the Blanding’s turtle!

The Blanding’s turtle ranges in size from 5 to 10 ¼ inches long. The carapace (upper shell) has a high dome and looks like a helmet. It is black or dark gray with yellow dots or markings. The plastron (lower shell) is yellow with a large black blotch on the edge of each scute. Blanding’s turtles have hinged plastrons which allow them to pull their head and limbs inside their shell and completely close the front of their shell.  Male Blanding’s turtles are larger than females. In addition, females have striping on the upper jaw while the male’s upper jaw is plain black giving the appearance of a moustache.

Blanding’s turtles live in marshes, ponds, or wetlands. They prefer water that is less than four inches deep with emergent vegetation and a mud bottom. They are primarily aquatic turtles but they are often found on land not far from water. They hibernate in the mud at the bottom of the water body where they live. They emerge from hibernation in April and return to the bottom of the marsh to hibernate in October.

Breeding occurs April through May. The female will lay 6-15 eggs in a nest she digs in the soil. The young hatch in about 60 days. Upon hatching they make their way to the marsh. Hatchlings are not as vividly marked as adults and their carapace is not as domed. As with most turtles, the young are not cared for by the adults. Blanding’s turtles may live up to 80 years and do not reach maturity until 14-20 years of age.

Blanding’s turtles are listed as an Iowa threatened species. The Blanding’s population is declining as their habitat is being altered or destroyed. It is illegal to kill, collect, or posses Blanding’s turtles. Any sightings in Iowa should be reported via the Iowa Herps website.

Threatened and Endangered Species in Iowa

Use Project WILD’s “Back from the Brink” to explore the issue of endangered and threatened species. Students are given background information on the recovery of wildlife species and are then asked to analyze the issue and make recommendations for the resolution. Make the Iowa connection and have students choose an Iowa species to research. Guide students as they choose a species, develop a recovery plan, and present their findings to the class. Something to think about: How could the local community and citizens be involved and help resolve any conflicts of interest?

Cross-reference to these units:

Aquatic WILD – Aquatic Life, The World in a Pond, People, Land, and Water